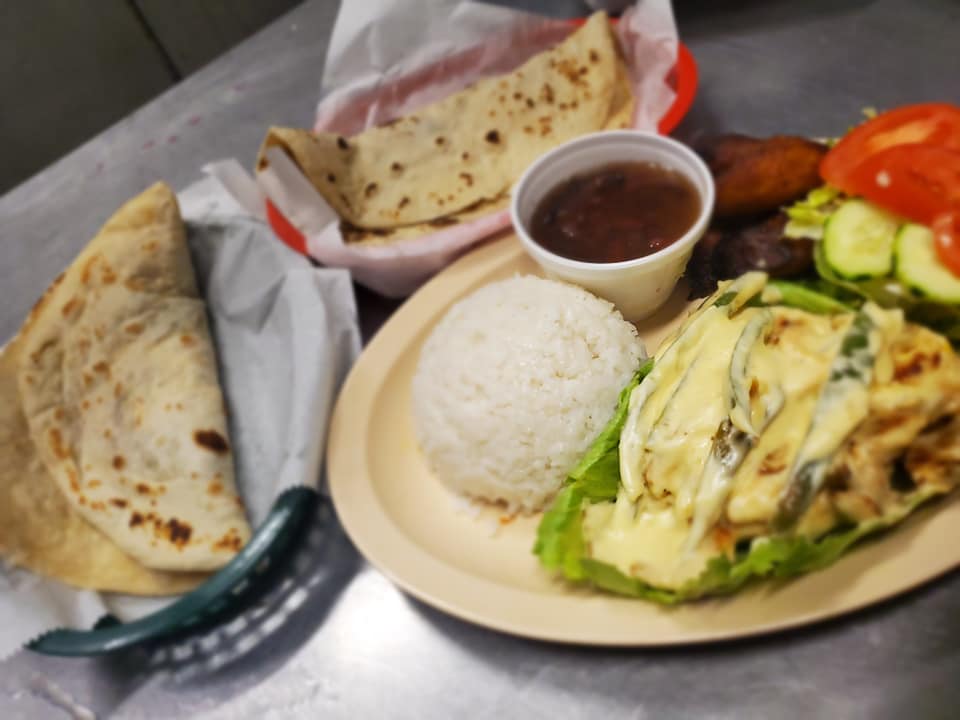 Baleadas are Honduran street food made up of a thick, homemade flour tortilla filled with refried beans and cheese. These soft tacos are super comforting, it’s easy to understand why they’re so popular!

Baleadas are a simple, yet delicious, street food that comes from the north coast of Honduras.

They consist of a thick flour tortilla that is filled with re-fried red beans, a sprinkle of grated cheese and cream.

What are re-fried red beans?

Red beans are a very popular side dish in Honduras. Whether re-fried or served in red beans and rice side dish, you will find them served with nearly any meal.

Honduran red beans are a particular type of bean that is often hard to find in the States. They are the color of a kidney bean, yet smaller in size. (Closer in size to a black bean.)

If you live near a Hispanic market, you may be able to find these red beans labeled “Frijol de Seda”, “silk beans”, “Central American red beans“, or “Salvadorean beans”.

Pinto beans have a much different flavor. So, if you want to use re-fried pinto beans in your baleadas, go ahead, but the flavor will be different than the Honduran classic.

According to one of our Honduran readers, black beans give you the closest flavor to Honduran red beans. So, we have used our recipe for homemade re-fried beans to make the refried black beans that we are using in our baleada.

Yes, it’s an extra step to make your own refried beans. But, the unexpected extra flavor dimension that the black beans give makes it so worth it!

What cheese is used in baleadas?

Hard white cheese is known as “queso duro” is the traditional cheese used in baleadas.

This cheese has a salty and robust flavor and is traditional to Honduras and El Salvador. It is often used as a garnish for re-fried beans, soup, and salads.

If you live near a Hispanic market and can find “queso duro” to make your baleadas, then go for it! If not, don’t worry. According to one of our Honduran readers, hard, grate-able cheese like Parmesan is a good substitute, so that’s what we have used in our recipe today.

What is Honduran sour cream?

A Honduran white cream called “mantequilla blanco” is a must for drizzling over baleadas.

This is a Honduran style sour-cream that is a bit more runny than sour cream in the States.

An acceptable substitute for this mantequilla blanco is sour cream that has been watered down with some milk.

How to make homemade flour tortillas

A key component of a baleada is the thick flour tortilla.
If you’ve never made your own tortillas, then this is the best tortilla recipe for you to start with. It is super easy to work with. And, the fact that these tortillas are rolled thick means that you don’t have to worry about rolling them to a perfect thin-ness.

To make these flour tortillas, mix a simple dough together and knead it until smooth and soft. Then it rests to relax the gluten and make rolling it out easier.

After resting, you simply divide it and roll it out into circles.

The tortillas are cooked on a dry skillet, roughly 1 minute on each side, until just lightly golden.

Don’t skip making your own tortilla for this recipe.

Once you taste homemade flour tortillas, you won’t want to go back to store-bought.

And, we’re not sorry!

Variations on our baleadas recipe

The recipe for baleadas we are sharing with you today is the dish in its most simple form.

Beans, cheese, and cream in a homemade flour tortilla.

But it doesn’t have to stop there!

Other common fillings for baleadas include scrambled eggs and/or avocado slices.

With scrambled eggs or not, we’d take one of these tasty treats for any meal of the day!